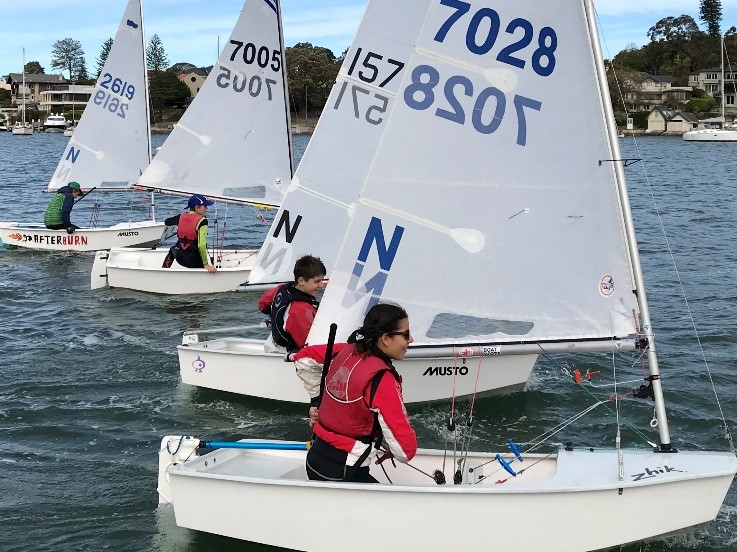 Whether you are finding out about how your kids can get into sailing or you’re a seasoned Sabot Sailor planning your preparation for the Nationals, there is a lot of fun to be had in the 2018/2019 season which starts this month.

The list of champion Olympic sailors who started their sailing career in Sabots is a long one. This year we hope to produce many more with our structured learn to sail and learn to race programs. Our Clubs’ programs are designed to help boys and girls 8 to 16yrs improve their skills and confidence as they work up to regular weekend racing and beyond.

Covering all points of the compass our most active Clubs (Drummoyne, Lane Cove, Narrabeen and Vaucluse) all provide great opportunities to get into sailing and progress up to Nationals level.

In addition to supporting our Clubs, we run and support an exciting list of inter-club regattas for kids at all levels to participate in throughout season.

So if you want to learn more about having fun sailing a Sabot, how to get started, how to find a boat or a crew – please contact your nearest club (see our Clubs page) or drop us a line here at the Association.

This is a great way to get over to another Sydney Club and meet the Sabot Community. We look forward to seeing you all Lane Cove.

This is a great way to get over to another Sydney Club and meet the Sabot Community. We look forward to seeing you all Lane Cove. 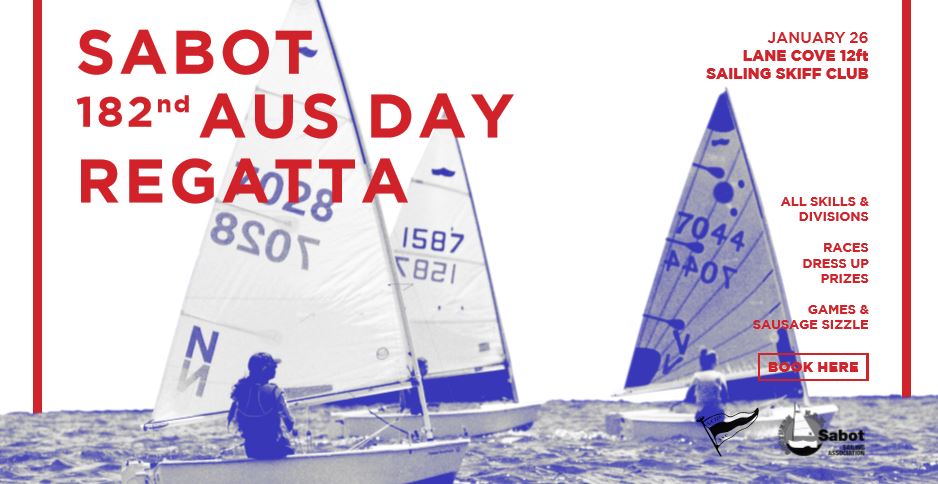 On January 26, 2018 LC12ftSSC hosted the Australia Day regatta on behalf of the Sabot Association.

We extended the invitation to all Sabot sailors and families to join us for a day of serious fun, and some serious sailing.

There were 3 short races from 11am – also novelty activities, prizes for best dressed sailors, best dressed boats plus a BBQ and presentation on the deck in the afternoon.

The day was attended by sailors and aspiring sailors, including Learn to Sail graduates and we recognised those that just started sailing in the 2017-18 season.

The Notice of Race can be downloaded here : Australia Day 2018 Sabot NOR

A great but very hot and fickle winds on Botany Bay for the 2015 NSW Youth Sailing Championships hosted by Georges River 16′ Skiff Club over the October long weekend. Sabot competitors came from Tasmania, Queensland and Victoria to make up a 24 boat fleet. Well done to all competitors. Many new boats from NSW made this their 1st regatta and did very well in the tricky conditions.

Congratulations to Tom Larkings from Lane Cove 12′ Sailing Skiff Club who had an outstanding regatta winning every race! Close on his tail was Will Bridge from Queensland in 2nd place and Nic Smart from Tasmania in 3rd place. Please see full results below.

Big thanks to YA NSW and GRSC for organising a great regatta and special thanks to Alex South for her coaching during the regatta.

After some quick work, the Sabot NSW Youth Regatta was organised by Drummoyne with 37 sailors hitting the water over the 2 day regatta format. With a nice Nor’easter on the Saturday it was a great decision by the RO, John Sanderson, to get in the 5 heats, as whilst a lovely day again greeted us on the Sunday the breeze only allowed one heat to be run in rounding out the event. Thanks to John, Nick, Alex and the team in getting the on water side of things well sorted.

The turnout for the event was great to see with a team coming down from Lake Macquarie, a range of boats from across Sydney, including Narrabeen, Vaucluse, Lane Cove, Hunters Hill and Drummoyne sailing club members, and our longest travellers making it up from Tassie for the event, well done to dad Andrew Jones for the driving effort and Josh who, after some hard fought tussles over the weekend, also took home the trophy.

Coming off the back of the training weekend it was great to see the youth regatta well attended by a number of participants who felt that after the four days of training they were ready to take off in there very first regatta, well done to all our sailors.

The Sabot association arranged for coaching support for the regatta and again Alex South, Greg Hartnett and Karen Gojnich provided great support in taking our sailors through some of the regatta and rule basics to make the regatta a fun event (no protests sited, penalty turns sportingly noted) and provided on water support over the two days. The coaches ensured all our kids received the support they needed to take them to the next level, whether at their first regatta or some of the up and comer “groms” chasing hard on the tail of Josh Jones our top ranked sailor, having finished 6th at the last National titles.

Thanks also to Karyn Gojnich for the great photo work.

What a great week, “You Beauty”.